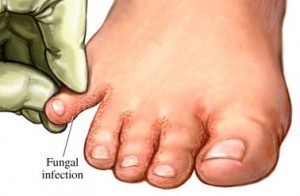 Foot nail fungus is a condition known to a podiatrist as onychomycosis. The condition typically begins as a noticeable discoloration on the edge of the nail and the area of discoloration increases as the fungus spreads. People who suffer from this condition will usually experience thickening, splitting, or even loss of the nail, as well as pain and itching around the affected area. If left untreated, a skin infection known as cellulites may develop.

The first indication of foot nail fungus is an abnormality of the nail. The person suffering from the condition may notice that the nail is changing color; it may be brown, yellow, or white. In many cases the discoloration starts with a small spot under the toenail, along the edge. Although foot nail fungus can be found in any nail, the large toenail is by far the most commonly affected. Over time the discoloration increases in area and towards the cuticle. The advancement of the discoloration does not happen immediately; it often takes several months of monitoring.

Along with the obvious discoloration of the nail, other sure signs include other abnormalities such as thickening or cracking of the nail. As the fungal infection progresses it leads to other issues, such as pain and itchiness. The sufferer may lose the complete toenail if the fungus disrupts enough of the nail bed under the nail. This can pose a problem as the vulnerable skin underlying the toenail is exposed to bacteria and other pathogens. Should the patient be diabetic, they might develop cellulites, a bacterial infection affecting the skin tissue. Signs of cellulites include a red rash that advances in a linear fashion through the skin.

Foot nail fungus is often related to athlete’s foot as both conditions are fungal in nature, despite the cause being a different fungus. It is not uncommon for someone to develop both foot nail fungus and athletes foot at the same time, especially for those that walk barefoot in communal areas or habitually wear damp shoes. If you are exhibiting symptoms of foot nail fungus, schedule an appointment with Alpine Foot Specialists today!